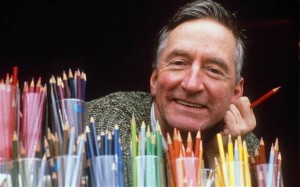 Raymond Briggs was born in Wimbledon, London, England, to parents Ethel and Ernester Briggs, He attended Rutlish School for Boys (then a grammar school), pursued cartooning from an early age and, despite his father’s attempts to discourage him from this unprofitable pursuit, attended the Wimbledon School of Art from 1949 to 1953 to study painting, and Central School of Art to study typography.

From 1953 to 1955 he was a conscript in the Royal Corps of Signals at Catterick where he was made a draughtsman.  After these two years of National Service, he returned to the study of painting at Slade School of Fine Art at University College, London, graduating in 1957.

After briefly pursuing painting, he became a professional illustrator, and soon began working in children’s books. In 1958, he illustrated Peter and the Piskies: Cornish Folk and Fairy Tales, a fairy tale anthology by Ruth Manning-Sanders that was published by Oxford University Press. They would collaborate again for the Hamish Hamilton book of magical beasts (Hamilton, 1966). In 1961 Briggs began teaching illustration part-time at Brighton School of Art, which he continued until 1986.  He was a commended runner up for the 1964 Kate Greenaway Medal (Fee Fi Fo Fum, a collection of nursery rhymes) and won the 1966 Medal for illustrating a Hamilton edition of Mother Goose. According to a retrospective presentation by the librarians, The Mother Goose Treasury “is a collection of 408 traditional and well loved poems and nursery rhymes, illustrated with over 800 colour pictures by a young Raymond Briggs.”

The first three important works that Briggs both wrote and illustrated were in comics format rather than the separate text and illustrations typical of children’s books; all three were published by Hamish Hamilton. Father Christmas (1973) and its sequel Father Christmas Goes on Holiday (1975) both feature a curmudgeonly Father Christmas who complains incessantly about the “blooming snow”. For the former, he won his second Greenaway. Much later they were jointly adapted as a film entitled Father Christmas. The third early Hamilton “comics” was Fungus the Bogeyman (1977), featuring one day in the life of a working class Bogeyman with the mundane job of scaring human beings.

“I remember that winter because it had brought the heaviest snows I had ever seen. Snow had fallen steadily all night long and in the morning I woke in a room filled with light and silence, the whole world seemed to be held in a dream-like stillness. It was a magical day… and it was on that day I made the Snowman.” Raymond Briggs

The Snowman (Hamilton, 1978) was entirely wordless, and illustrated with only pencil crayons.  Briggs said that it was partly inspired by his previous book, “For two years I worked on Fungus, buried amongst muck, slime and words, so… I wanted to do something which was clean, pleasant, fresh and wordless and quick.”  For that work Briggs was a Highly Commended runner up for his third Greenaway Medal; no one has won three.  An American edition was produced by Random House in the same year, for which Briggs won the Boston Globe–Horn Book Award, picture book category. In 1982 it was adapted by British Channel 4 as an animated cartoon, which was nominated for the annual “Oscar” and has since been shown every year on British television. On Christmas Eve 2012 the 30th anniversary of the original was marked by the airing of the sequel The Snowman and the Snowdog.

Briggs continued to work in a similar format, but with more adult content, in Gentleman Jim (1980), a sombre look at the working class trials of Jim and Hilda Bloggs, closely based on his parents. When the Wind Blows (1982) confronted the trusting, optimistic Bloggs couple with the horror of nuclear war, and was praised in the British House of Commons for its timeliness and originality. The topic was inspired after Briggs watched a Panorama documentary on nuclear contingency planning, and the dense format of the page was inspired by a Swiss publisher’s miniature version of Father Christmas.  This book was turned into a two-handed radio play with Peter Sallis in the male lead role, and subsequently an animated film, featuring John Mills and Peggy Ashcroft.  The Tin-Pot Foreign General and the Old Iron Woman (1984) was a scathing denunciation of the Falklands War. However, Briggs continued to produce humour for children, in works such as the Unlucky Wally series and The Bear.

His wife Jean, who suffered from schizophrenia, died from leukaemia in 1973, only two years after his parents. They did not have any children.

As of 2014, Briggs lives in a small house in Westmeston, Sussex and continues to work on writing and illustrating books.