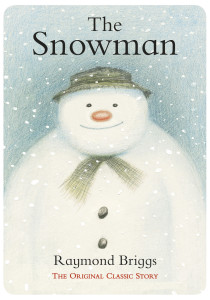 The Snowman is the tale of a boy who builds a snowman one winter’s day.  That night, at the stroke of twelve, the snowman comes to life.  The first part of the story deals with the snowman’s attempts to understand the appliances, toys and other bric-a-brac in the boy’s house, all while keeping quiet enough not to wake the boy’s parents.  The two then venture back outside and go for a ride on a motorbike, disturbing many animals: pheasants, rabbits, a barn owl, a fox and a brown horse.

In the second part of the story, the boy and the snowman take flight - the song “Walking in the Air” appears at this point.  They fly over the boy’s town, over houses and large public buildings before flying past the Royal Pavilion in Brighton and West Pier and then out into the ocean.  They continue through an arctic landscape and fly past many sights and animals such as penguins.  Flying into the aurora they reach their destination.

The two wander hand-in-hand into a snow-covered forest and attend a snowmen’s party, at which the boy is the only human.  They meet Father Christmas and his reindeer, and the boy is given a scarf with a snowman pattern.

The morning after the return journey the sun has come out and the boy wakes up to find the snowman has melted.  The boy reaches into his pocket and finds the snowman scarf given to him by Father Christmas.  As the credits play, the boy mourns the loss of his new friend.